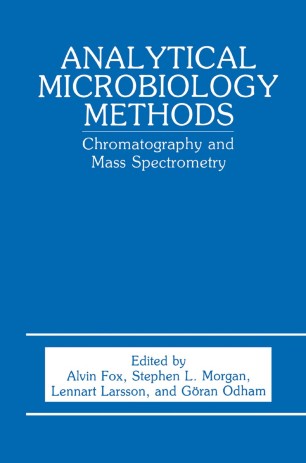 The First International Symposium on the Interface between Analytical Chemistry and Microbiology: Applications of Chromatography and Mass Spectrometry was held June 1987 at the University of South Carolina, Columbia, SC, U.S.A. The purpose of the "Interface" meeting was to forge connections between analytical chemists and microbiologists that are using chromatography and mass spectrometry to solve common problems. The goals were admirably fulfilled. Nearly a hundred participants from seven European countries, Japan, and the United States participated in hearing twenty-three plenary talks and thirty-six submitted papers and posters. The papers and discussions displayed the breadth and depth of current research applications and revealed future directions. This book "Analytical Microbiology Methods: Chromatography and Mass Spectrometry" is loosely based on some of the presentations and discussions at the meeting. Each chapter describes specific methodology and applications in the context of the relevant scientific background. The present book continues the theme of an earlier book, "Gas Chromatography/Mass Spectrometry Applications in Microbiology", edited by G. Odham, L. Larsson, and P-A. Mardh, published by Plenum Press in 1984.