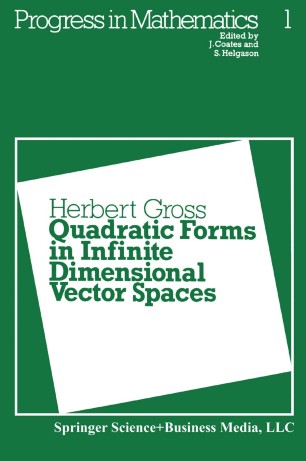 Part of the Progress in Mathematics book series (PM, volume 1)

For about a decade I have made an effort to study quadratic forms in infinite dimensional vector spaces over arbitrary division rings. Here we present in a systematic fashion half of the results found du­ ring this period, to wit, the results on denumerably infinite spaces (" NO-forms'''). Certain among the results included here had of course been published at the time when they were found, others appear for the first time (the case, for example, in Chapters IX, X , XII where I in­ clude results contained in the Ph.D.theses by my students W. Allenspach, L. Brand, U. Schneider, M. Studer). If one wants to give an introduction to the geometric algebra of infinite dimensional quadratic spaces, a discussion of N-dimensional O spaces ideally serves the purpose. First, these spaces show a large number of phenomena typical of infinite dimensional spaces. Second, most proofs can be done by recursion which resembles the familiar pro­ cedure by induction in the finite dimensional situation. Third, the student acquires a good feeling for the linear algebra in infinite di­ mensions because it is impossible to camouflage problems by topological expedients (in dimension NO it is easy to see, in a given case, wheth­ er topological language is appropriate or not).