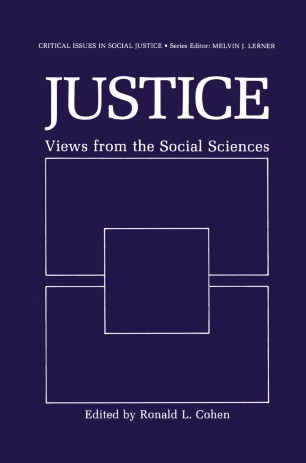 Views from the Social Sciences

Ronald L. Cohen Justice is a central moral standard in social life. It is invoked in judging individual persons and in judging the basic structure of societies. It has been described as akin to a "human hunger or thirst" (Pascal, Pensees, cited in Hirschman, 1982, p. 91), "more powerful than any physical hunger, and endlessly resilient" (Pitkin, 1981, p. 349). The most prominent contemporary theory of justice proceeds from the claim that justice is "the first virtue of social institutions, as truth is systems of thought" (Rawls, 1971, p. 3). However, as the following chapters demonstrate, justice has a complex and controversial history. If, as has been claimed, justice is a central category of human thought and a central aspect of human motivation, can it also be the case that to invoke justice is no more than "banging on the table: an emotional expression which turns one's demand into an absolute postulate" (Ross, 1959, p. 274)? If justice is the first virtue of social institutions, can the concept of social or economic justice at the same time be "entirely empty and meaningless" so that any attempt to employ it is "either thoughtless or fraudulent" (Hayek, 1976, pp. xi-xii)? In a formal sense, justice concerns ensuring that each person receives what she or he is due.