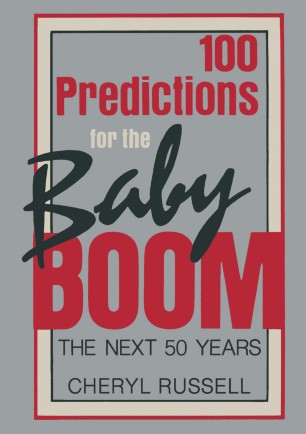 100 Predictions for the Baby Boom

Without the baby boom, the United States would be a different place. The Vietnam War would have lasted longer. Rock and roll would be less pervasive. The civil rights movement would have changed laws and attitudes more slowly. But women might be further ahead in job status and pay if there had been no baby boorr.. Hous­ ing would be cheaper. The economy would have done better in the 1970s, and people now in their 20s, 30s, and 40s would be making more money. For the past 30 years, the baby boom generation­ all those born between 1946 and 1964-shook American economics, politics, and culture. But the full impact of 7 8 PREFACE the baby boom is yet to come because the generation is just now gaining the economic and political power to de­ termine events. Though the baby boom is a diverse generation linked only by its date of birth, that link is critical. The gener­ ation spans 19 years, which means many boomers ex­ perience the same things at the same time-going to col­ lege, getting a job, marrying, divorcing, buying a house, starting a family. Because of this, the baby boom in­ fluences what America's businesses produce, what the media write about, and what the politicans support. It focuses the nation's attention on itself; its concerns be­ come the nation's concerns. Whatever age the baby boom is becomes the nation's age.