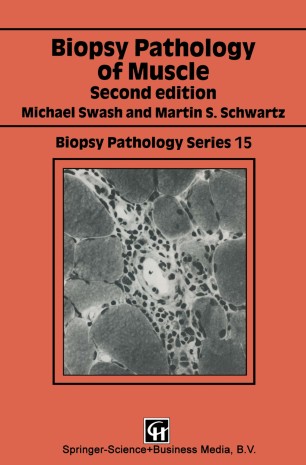 Museie biopsy is a long-established technique in clinical practice having been introduced by Duchenne in 1868 (Arch. Gen. Med. , 11, 5-179). However, the needle method used by Duchenne was not generally adopted, although Shank and Hoagland described a similar technique in 1943 (Science, 98, 592), and open muscle biopsy has for long been preferred in clinical practice, even with the advent of newer needle biopsy methods (Bergstrom, 1962, Scand. J. Clin. Lab. Invest. , 14, Suppl. 68, 1-110). The development of enzyme histochemical techniques has contributed greatly to knowledge of muscle pathology. More recently electron microscopy and immunocytochemistry have also been applied to clinical diagnosis of neuromuscular disease. This book is intended to serve as a practical guide in muscle pathology, particularly for histopathologists, and for those in training. As enzyme histochemistry has become more widely available, formalin-fixed methods have become less frequently used in muscle biopsy work. In this new edition of Muscle Biopsy Pathology we have taken account of the advances in classification and histological technique, and in knowledge of neuromuscular diseases, that have emerged since the first editionwas published in 1984. We hope that this book will continue to be used as a practical guide in the diagnosis and understanding of these disorders. 1. Introduction 1. 1 Generalfeatures of muscle The differentiation of musde into red and white types is a feature of all vertebrates and, indeed, of chordates.