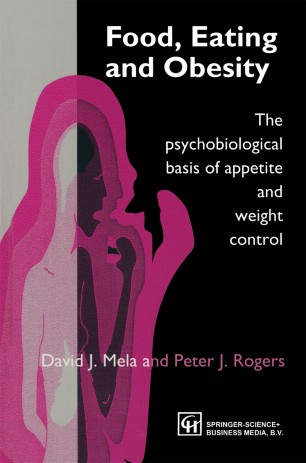 The psychobiological basis of appetite and weight control

Although the exact prevalence of overweight and obesity are dependent upon the definition used, these conditions are generally accepted to be widespread and increasing problems by health authorities and the public in most western nations. The proportion of the UK and US populations which are overweight or obese, by any measure, has substantially risen over the past decade, and similar increases have been observed in other western nations as well as rapidly modernizing societies (Hodge et a/. , 1996). The physiological, psychological, and social! environmental fac­ tors which may be implicated in the aetiology, maintenance, and treat­ ment of these conditions have been the subject of an extraordinary volume of human and animal research, scientific conferences, and techni­ cal and popular literature. This book focuses specifically on the role of food and eating in overeat­ ing and obesity, emphasizing the relationships between people and food which may give rise to positive energy balance, and the potential contri­ butions of specific components, foods, or groups of foods. The intent is to integrate the psychobiological and cognitive psychological aspects of appetite, food preferences, and food selection with physiological and metabolic outcomes of eating behaviours. The ingestion of a particular quality and quantity of food is a voluntary behaviour, and that act, its determinants, features and sequelae are explored here, considering wider academic thought but guided by potential practical implications.