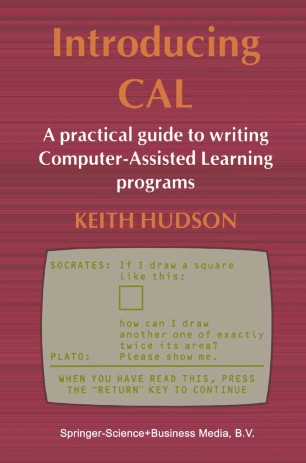 It is often the case - perhaps more often than not - that new ideas arrive long before there is the me ans to clothe and deli ver them. We can think ofLeonardo da Vinci's drawings of helicopters and submarines among many other examples. Computer-Assisted Learning (CAL) is an example of an idea which has had a particularly long gestation. As I will illustrate early in the book, the principles of CAL were really first discovered by Socrates. As a formal method of teaching, the Socratic method disappeared for over two millennia until the 1950s. It was then revived in the form ofProgrammed Learning (PL) which resulted from the researches ofB. F. Skinner at Harvard University. Even then, PL was premature. In the 1950s and 60s, methods were devised, such as teaching machines and various sorts ofPL text books, and there was a mushrooming of PL publishing at that time. For a complex of reason- economic, logistical and technical-PL also largely disappeared from the mid- 60s, although it continued in a few specialized areas ofteaching and industrial training. However, during the same period, PL quietly transformed itselfinto CAL. But the computerized form was not capable of mass dissemination until recently hecause personal microcomputers did not have sufficient internal memory sizes. That situation has now changed very dramatically and 128K microcomputers are becoming cheap and widely available. Cheap memory chips of256K and 1024K cannot be far away, either.