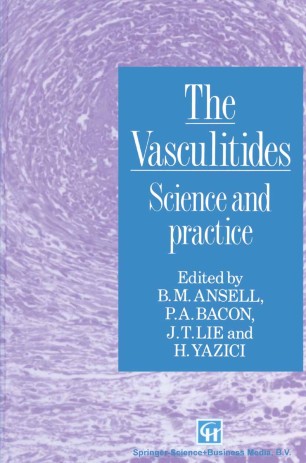 Professor E. G. L. Bywaters CBE, MO, FRCp, FACP This book provides a summary - a distillation - of most of the presenta­ tion at the XIIIth Symposium of EULAR (The European League Against Rheumatism) on Vasculitis organized by Professor Hasan Yazici and Professor Paul Bacon. It was indeed a symposium, a festival of learn­ ing, science and medicine held in June 1994 in Istanbul, Turkey, in one of the newest and most lavishly fitted modem hotels of the twentieth century, with more extravagant fittings than any sultan at the height of his power was able to command and with a splendidly equipped con­ ference center as well as a lovely view south-east over the Bosphorous with its busy water traffic. In contrast was the history by which we were surrounded, the early churches of Constantine, the mosques and palaces of the Ottoman sultans, a city embued with an illustrious past and which perhaps was at one time the most famous and the richest in the world. The participants (numbering about 1000), like those early traders of the Golden Hom, united Eastern and Western worlds. They came from the Americas, from the Antipodes, from Asia and, of course, from Europe, bridging the world of science as did the ancient bridges and boats of the Bosphorous in their own time.