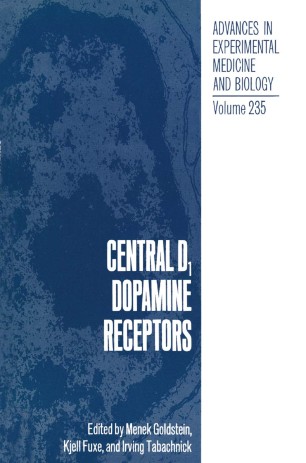 Part of the Advances in Experimental Medicine and Biology book series (AEMB, volume 235)

The development of a selective D1 dopamine (DA) receptor antagonist SCH 23390 stimulated a number of studies on the functions mediated by central DA receptor subtypes. It was generally assumed that the central D1 DA receptor isa molecular entity whose function awaits further discovery. The papers presented in this volume clearly show that this is no longer the case and that D1 DA receptors have many behavioral fuctions which might be altered in pathological states. A number of papers have recognized the interdependence of the regulatory functions of the D1 DA receptors with D2 and other receptor proteins, and vice versa. The biochemical, pharmacological and morphological characterization of the D1 and D2 DA receptor binding proteins, as well as of DARPP-32, illustrates the complex interactions between various macromolecules. Procedures described for the purification of the D1 and D2 DA receptor subtypes are fundamental for future studies on the mechanisms involved in the coupling of the receptor proteins with signal transducing systems. Several studies in this volume show that D1 DA receptors have behavioral functions and that they are often similar to the responses mediated by D2 DA receptors, but in some instances reflect divergent neuronal activity of both systems. The knowledge of the physiology and biochemistry of the central DA receptor subtypes could lead to the development of a new generation of drugs which ameliorate some mental and neurological dysfunctions without producing severe undesirable side effects.