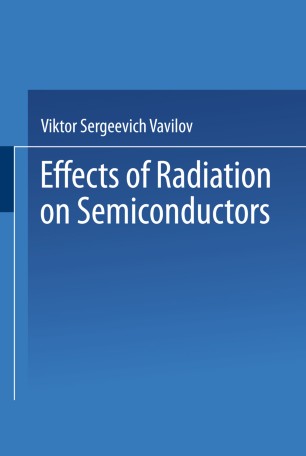 Effects of Radiation on Semiconductors

The effects of electromagnetic radiation and high-energy par­ ticles on semiconductors can be divided into two main processes: (a) the excitation of electrons (the special case is internal ioniza­ tion, i. e. , the generation of excess charge carriers); and(b) dis­ turbance of the periodic structure of the crystal, i. e. , the forma­ tion of "structural radiation defects. " Naturally, investigations of the effects of radiation on semiconductors cannot be considered in isolation. Thus, for example, the problern of "radiation de­ fects" is part of the generalproblern of crystal lattice defects and the influence of such defects on the processes occurring in semi­ conductors. The same is true of photoelectric and similar phe­ nomena where the action of the radiation is only the start of a complex chain of nonequilibrium electronprocesses. Nevertheless, particularly from the point of view of the experimental physicist, the radiation effects discussed in the present book have inter­ esting features: several types of radiation may produce the same resul t (for example, ionization by photons and by charged particles) or one type of radiation may produce several effects (ionization and radiation -defect formation). The aim of the author was to consider the most typical prob­ lems. The subjects discussed differ widely from one another in the extent to which they have been investigated.