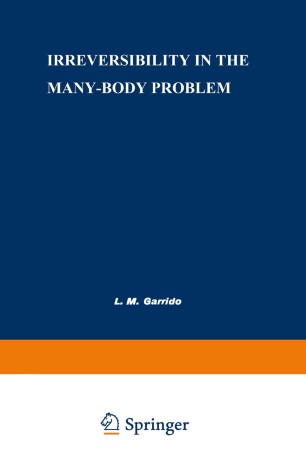 Irreversibility in the Many-Body Problem

Sitges International School of Physics, May 1972

The Sitges International School of Physics is the second one to be held in Spain on the Many Body Problem. The first one took place on Mallorca during the summer 1969. The aim of the school was mainly to direct the interest of professors and students of Spanish Universities tow~rds this concrete field of re­ search. For this purpose 55 ~specially prepared lectures were given by an eminent collection of lecturers. Besides, a school of this class contri­ butes to the scientific formation of many students from other countries. Also, in a meeting of this kind, personal contacts are born that favour future co~laboration between scientists. In view of the success of the first two schools, we intend to foster future international meetings on this subject until interest in it is consolidated in Spain. All the lectures given are published here except those of Professor P.C. Martin whose lec­ tures have previously been published. I would like to thank all those people who helped to make this school a success, and in particular: Prof. J.L. Villar-Palasi, Minister of Educa­ tion of Spain for sponsoring the school. Dr. R. Diez-Hochleitner, Undersecretary of the Ministry of Education for receiving the project of this school with such enthusiasm. v PREFACE Prof. E.Costa-Novella, Director General of Universities in Spain and Dr. F.Arias-Salgado who showed such interest and patience while assuring the necessary finance would be found for the school.