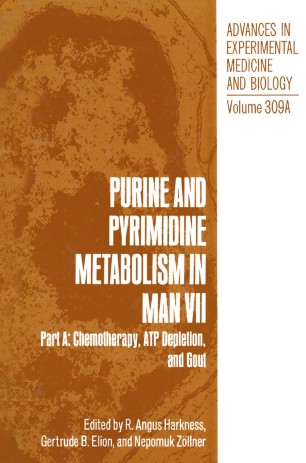 Part of the Advances in Experimental Medicine and Biology book series (AEMB, volume 309A)

These two volumes record the scientific and clinical work presented at the VIIth International and 3rd European joint symposium on purine and pyrimidine metabolism in man held at the Bournemouth International Conference Centre, Bournemouth, UK, from 30th June to 5th July 1991. The series of international meetings at three yearly intervals have previously been held initially in 1973 in Israel, then Austria, Spain, the Netherlands, USA and Japan. The European society for the Study of Purine and Pyrimidine Metabolism in Man (ESSPPM) which has its own executive and some finance first met in Switzerland in 1987, then in Germany in 1989. The steady evolution of the science in this series of meetings is intellectually satisfying; the subsequent clinical progress is emotionally and economically reassuring. As befits the position of purines and pyrimidines at the centre of biochemistry, there has been steady scientific development into molecular genetics and now onto developmental controls and biochemical pharmacology. The complexities of the immune system are being unravelled but an understanding of the human brain largely eludes us. Laboratory based scientists now predominate over those who work as clinical specialists in vii rheumatology, immunology, oncology and paediatrics. However, there continue to be major clinical objectives since large sections are concerned with major causes of death like ATP depletion, cancer and now AIDS; the laboratory work is providing clinical solutions.