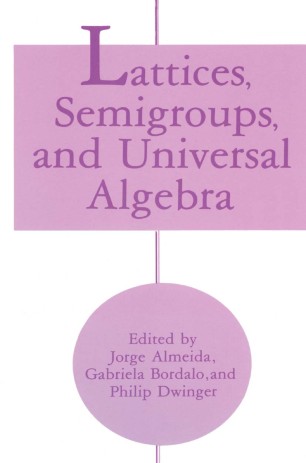 This volume contains papers which, for the most part, are based on talks given at an international conference on Lattices, Semigroups, and Universal Algebra that was held in Lisbon, Portugal during the week of June 20-24, 1988. The conference was dedicated to the memory of Professor Antonio Almeida Costa, a Portuguese mathematician who greatly contributed to the development of th algebra in Portugal, on the 10 anniversary of his death. The themes of the conference reflect some of his research interests and those of his students. The purpose of the conference was to gather leading experts in Lattices, Semigroups, and Universal Algebra and to promote a discussion of recent developments and trends in these areas. All three fields have grown rapidly during the last few decades with varying degrees of interaction. Lattice theory and Universal Algebra have historically evolved alongside with a large overlap between the groups of researchers in the two fields. More recently, techniques and ideas of these theories have been used extensively in the theory of semigroups. Conversely, some developments in that area may inspire further developments in Universal Algebra. On the other hand, techniques of semi group theory have naturally been employed in the study of semilattices. Several papers in this volume elaborate on these interactions.