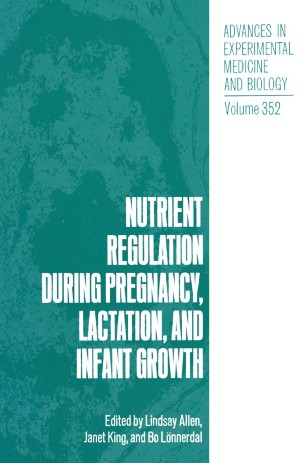 Part of the Advances in Experimental Medicine and Biology book series (AEMB, volume 352)

Almost every aspect of energy and nutrient metabolism is altered by hormonal and other physiological changes during pregnancy and lactation. While it is evident that hormonal adjustments affect nutrient requirements, these are rarely considered when nutrient recommen­ dations are made for pregnant or lactating women, and often neglected during evaluation of nutritional status. In addition, changes in nutrient metabolism during the stages of pregnancy and oflactation are usually considered separately, while in reality events during pregnancy can have a major influence on nutritional status and nutrient requirements during lactation. The purpose of this volume is to describe changes in the metabolism of important nutrients during pregnancy and lactation, including the physiological basis for these changes and their implications for nutrient requirements and assessment. Authors have considered such issues as inter-relationships between endocrine changes and nutrient metabolism at the tissue, cellular and molecular level; alterations in nutrient binding proteins; the efficiency of nutrient absorp­ tion and retention; and the impact on maternal as well as fetal nutritional status. Another unique aspect of this book is the focus on pregnancy and lactation as a continuum.