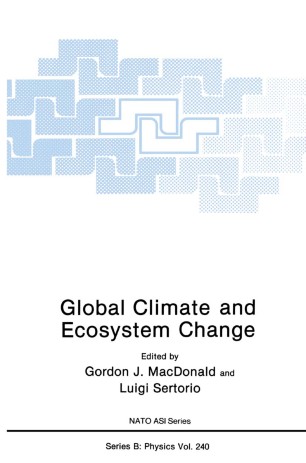 Humankind's ever-expanding activities have caused environmental changes that reach beyond localities and regions to become global in scope. Disturbances to the atmosphere, oceans, and land produce changes in the living parts of the planet, while, at the same time, alterations in the biosphere modify the atmosphere, oceans, and land. Understanding this complex web of interactions poses unprecedented intellectual challenges. The atmospheric concentrations of natural trace gases-carbon dioxide (C0 ), methane (CH. ), nitrous oxide (N0), and lower-atmosphere ozone 2 2 (Os)-have increased since the beginning of the industrial revolution. Industrial gases such as the chlorofluorocarbons (CFCs), which are not part of the natural global ecosystem, are increasing at much greater rates than are the naturally occurring trace gases. All these gases absorb and emit infrared radiation and thus have the potential for altering global climate. The major terrestrial biomes are also changing. Although world attention has focused on deforestation, particularly in tropical areas, the development of agriculture, the diversion of water resources, and urbanization have all modified terrestrial ecosystems in both obvious and subtle ways. The terrestrial biosphere, by taking up atmospheric carbon dioxide, acts as a primary determinant of the overall carbon balance of the global ecosystem. Although the ways in which the biosphere absorbs carbon are, as yet, poorly understood, the destruction (and regrowth) of forests certainly alter this process.