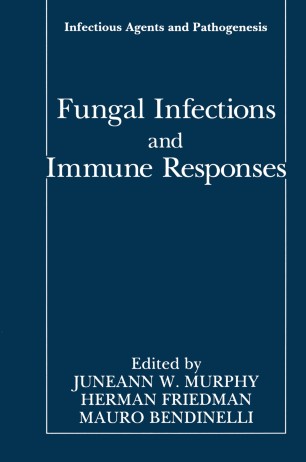 Part of the Infectious Agents and Pathogenesis book series (IAPA)

Biomedical scientists widely acknowledge that individuals' immune respon­ siveness is important in resistance to infections by microorganisms, including fungi. Because of the devastating acquired immunodeficiency syndrome (AIDS) epidemic, caused by the human immunodeficiency retrovirus, it is now accepted that suppressed immune responses, especially cellular immu­ nity, are important contributors to increased individual susceptibility to opportunistic infections-including infections caused by fungi which were at one time thought to be very lowly or nonpathogenic. Within the last few years, there has been an almost explosive increase in interest and studies concerning the nature and mechanisms of the immune response to fungal infections. Many immunologists who are not well versed in mycology have begun to study the nature and mechanisms of antifungal immunity using a wide variety of newer as well as more conventional immunologic technologies, both in vivo and in vitro. Up to the 1980s, however, there was little interest among basic immunologists concerning fungal immunity. This situation has changed dramatically in the past half decade, mainly because of AIDS.