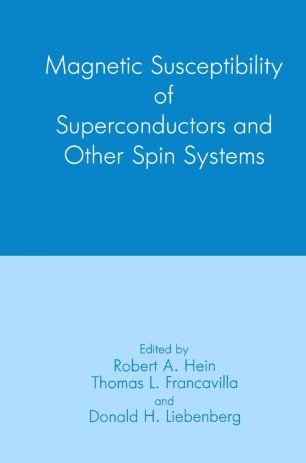 Magnetic Susceptibility of Superconductors and Other Spin Systems

The workshop entitled Magnetic Susceptibility of Superconductors and other Spin Systems (S4) was held at Coolfont Resort and Health Spa. located near Berkley Springs West Virginia on May 20-23. 1991. There were over sixty attendees. approximately half from the United States. the remainder representing over twelve different countries. The international character of the workshop may be gleaned form the attendee list, included in this volume. The intent of the workshop was to bring together those experimentalists and theoreticians whose efforts have resulted in significant recent contributions to the development and use of the ac susceptibility technique as well as to the interpretation of data obtained from these measurements. Many spirited discussions occurred during and after the presentations. These are reflected in the manuscripts contained in these proceedings. Although camera ready manuscripts were required from all participants at registration, all manuscripts were revised and reflect the lively exchanges that followed each presentation. The small size of the workshop allowed the participants a high degree of flexibility. Consequently when a controversial topic such as "the irreversibility line" emerged, a special session was organized on the spot. At the suggestion of Ron Goldfarb, participants were invited to contribute a one page summary containing their thoughts on the topic. These stand alone contributions were retyped and included as submitted, with only minor editorial changes. These proceedings are intended for those experienced scientists new to the field and graduate students just beginning their research.