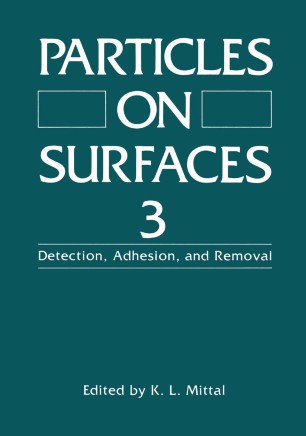 This volume chronicles the proceedings of the Third Symposium on Particles on Surfaces : Detection, Adhesion and Removal held as a part of the 21st Annual Meeting of the Fine Particle Society in San Diego , California, August 21 - 25 , 1990 . The first two symposia i n t h i s series were held in 1986 and 1988 , respectively, and have been properly l documented ,2. Li ke its antecedent s the Third symposium was very well received, and the continuing success of these symposia reinforced our earlier belief that regular symposia on the topic of particles on surfaces were very much needed. Concomitantly, the fourth symposium in this series is planned in Las Vegas , July 13-17 , 199 2 . l As pointed out in the Preface to the earlier two volumes ,2, the topic of particles on surfaces is of tremendous interest and concern in a wide spectrum of technological areas . The objectives of the Third symposium were es s ent i a l ly the same as those of the earlier two and our intent her e was to provide an update on the research and development activities in the world of particles on surfaces . Apropos , there has been a deliberate attempt every time to s eek out new people to present their research results and we have been very succes s f ul in this mission.