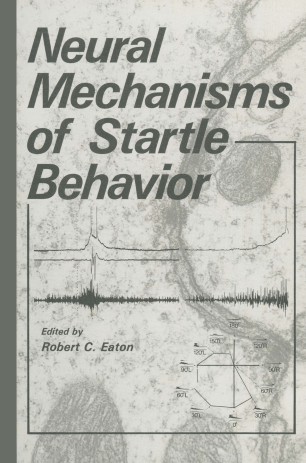 In the past fifteen years there has been considerable interest in neural circuits that initiate behavior patterns. For many types of behaviors, this involves decision-making circuits whose primary elements are neither purely sensory nor motor, but represent a higher order of neural pro­ cessing. Of the large number of studies on such systems, analyses of startle circuits compose a major portion, and have been carried out on systems found throughout the animal kingdom. Startle has been an im­ portant model because of the reliability of the behavioral act for laboratory study and the accessibility of the underlying neural circuitry. However, probably because of the breadth of the subject, this material has never been reviewed in a comprehensive way that presents the elements com­ mon to startle circuits in the different animal systems in which they occur. This book presents a diversity of approaches based on a broad back­ ground of animal groups ranging from the earliest nervous systems in cnidarians to the most recently evolved and advanced in mammals. The behaviors themselves are all short latency, fast motor acts, when consid­ ered on the time scale of the organism, and involve avoidance or evasion, although in some cases we do not yet completely understand their natural role. These behaviors occur in response to stimuli that have sudden or unexpected onset.