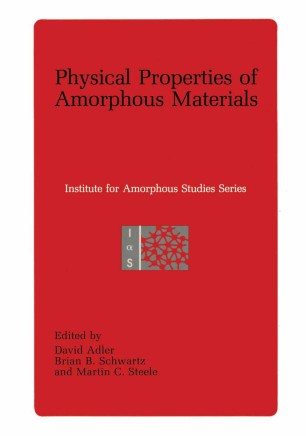 The Institute for Amorphous Studies was founded in 1982 as the international center for the investigation of amorphous mate­ rials. It has since played an important role in promoting the und er­ standing of disordered matter in general. An Institute lecture series on "Fundamentals of Amorphous Materials and Devices" was held during 1982-83 with distinguished speakers from universities and industry. These events were free and open to the public ,and were attended by many representatives of the scientific community. The lectures themselves were highly successful inasmuch as they provided not only formal instruction but also an opportunity for vigorous and stimulating debate. That last element could not be captured within the pages of a book I but the lectures concentrated on the latest advances in the field I which is why their essential contents are he re reproduced in collective form. Together they constitute an interdisciplinary status report of the field. The speakers brought many different viewpoints and a variety of back­ ground experiences io bear on the problems involved I but though language and conventions vary I the essential unity of the concerns is very clear I as indeed are the ultimate benefits of the many-sided approach.