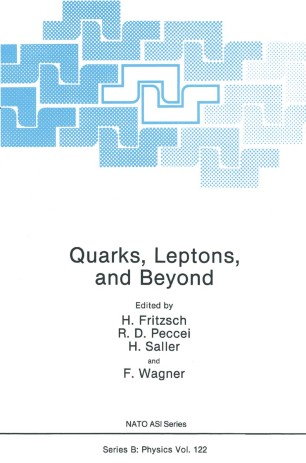 Quarks, Leptons, and Beyond

The ASI Quarks, Leptons and Beyond, held in Munich from the 5th to the 16th of September 1983 was dedicated to the study of what we now believe are the fundamental building blocks of nature: quarks and leptons. The subject was approached on two levels. On the one hand, a thorough discussion was given of the status of our knowledge of quarks and leptons and their interactions, both from an experi­ mental and a theoretical standpoint. On the other hand, open problems presented by the so called standard model of quark and lepton interact­ ions were explored along various ways that lead one beyond this frame­ work. One of the principal predictions of the standard model is that weak interactions are mediated by heavy Wand Z vector bosons. These particles were discovered in 1983 at CERN and their relevant proper­ ties were discussed at the ASI by C. Rubbia. Further theoretical predictions concerning these Z and W bosons, yet to be checked by future experimentation, were discussed by G. Altarelli with a view of seeing where the standard model might fail and new physics ensue. The strong interactions of quarks, based on Quantum Chromodynamics (QeD), are presumed to cause the quarks to bind into hadrons. Pro­ gress in attempts to calculate the observed hadronic spectrum, ab initio, starting from QCD and employing lattice methods were reviewed at the ASI by P. Hasenfratz.