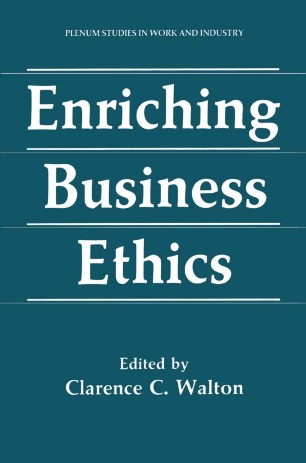 Over thirty years ago, Alfred North Whitehead wrote: "If America is to be civilized, it has to be done (at least for the present) by the business class who are in possession of the power and the economic resources . . . . If the American universities were up to their job, they would be taking business in hand and teaching it ethics and professional standards. " * To the intellectual elites of his time, there was something of a minor in Whitehead's view. Few of them saw business as a civilizing force heresy and even fewer, feeling that business was not to be tamed, relished the role of the lion tamers. Not many today doubt Whitehead's wisdom. Organiza­ tions of wealth and power have accepted their corporate social responsibili­ ties, and universities have launched major efforts to provide ethical instruc­ tion for business personnel. So far as the scholars are concerned, they quickly came to realize the difficulty of an undertaking that seeks to redefine and apply moral criteria to a very complex corporate world. Philosophers, in particular, have learned (or perhaps have relearned) how their speculations on ethics must take into account the "living ethic" expressed in the American culture­ and here anthropologists, sociologists, and theologians were needed to provide an expertise that the moral manuals did not.