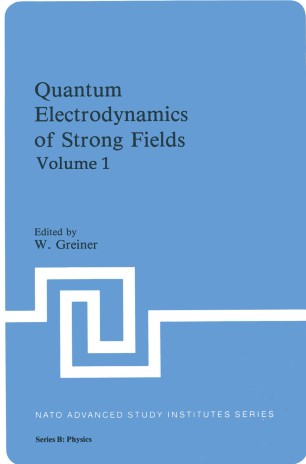 The NATO Advanced Study Institute on Quantum Electrodynamics of Strong Fields was held at Lahnstein on the Rhine from 15-26 June, 1981. The school was devoted to the advances, theoretical and exper­ imental, in the physics of strong fields made during the past decade. The topic of the first week was almost exclusively quantum electrodynamics, with discussions of symmetry breaking in the ground state, of the physics of heavy ion collisions and of precision tests of perturbative quantum electrodynamics. This was followed in the second week by the presentation of a broad range of other areas where strong fields occur, reaching from nuclear physics over quantum chromodynamics to gravitation theory and astrophysics. We were fortunate to be able to call on a body of lecturers who not only have made considerable personal contributions to these advances but who are also noted for their lecturing skills. Their dedication for their subject was readily transmitted to the stu­ dents resulting in a very successful school. This enthusiasm is also reflected in their contributions to these Proceedings which, as I believe, will in time become a standard source of reference for future work on the physics of strong fields and will help to spread the benefits of the school to a larger audience than those who were able to attend. I regret that the Soviet colleagues Ya. B. Zeldovich and V. S. Popov were unable to participate.