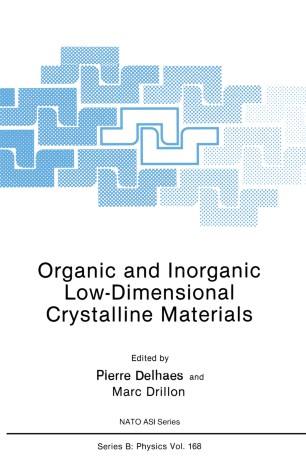 The research of unitary concepts in solid state and molecular chemistry is of current interest for both chemist and physicist communities. It is clear that due to their relative simplicity, low­ dimensional materials have attracted most of the attention. Thus, many non-trivial problems were solved in chain systems, giving some insight into the behavior of real systems which would otherwise be untractable. The NATO Advanced Research Workshop on "Organic and Inorganic Low-Dimensional Crystalline Materials" was organized to review the most striking electronic properties exhibited by organic and inorganic sytems whose space dimensionality ranges from zero (Od) to one (1d), and to discuss related scientific and technological potentials. The initial objectives of this Workshop were, respectively: i) To research unitary concepts in solid state physics, in particular for one dimensional compounds, ii) To reinforce, through a close coupling between theory and experiment, the interplay between organic and inorganic chemistry, on the one hand, and solid state physics on the other, iii) To get a salient understanding of new low-dimensional materials showing "exotic" physical properties, in conjunction with structural features.