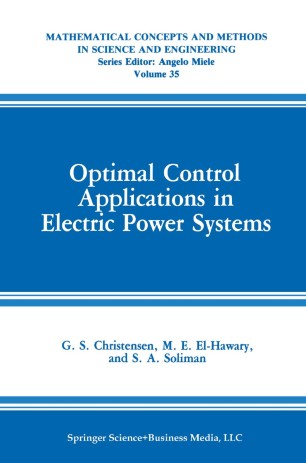 Part of the Mathematical Concepts and Methods in Science and Engineering book series (MCSENG, volume 35)

Significant advances in the field of optimal control have been made over the past few decades. These advances have been well documented in numerous fine publications, and have motivated a number of innovations in electric power system engineering, but they have not yet been collected in book form. Our purpose in writing this book is to provide a description of some of the applications of optimal control techniques to practical power system problems. The book is designed for advanced undergraduate courses in electric power systems, as well as graduate courses in electrical engineering, applied mathematics, and industrial engineering. It is also intended as a self-study aid for practicing personnel involved in the planning and operation of electric power systems for utilities, manufacturers, and consulting and government regulatory agencies. The book consists of seven chapters. It begins with an introductory chapter that briefly reviews the history of optimal control and its power system applications and also provides an outline of the text. The second chapter is entitled "Some Optimal Control Techniques"; its intent is to introduce fundamental concepts of optimal control theory that are relevant to the applications treated in the following chapters. Emphasis is given to clear, methodical development rather than rigorous formal proofs. Topics discussed include variational calculus, Pontryagin's maximum principle, and geometric methods employing functional analysis. A number of solved examples are included to illustrate the techniques.