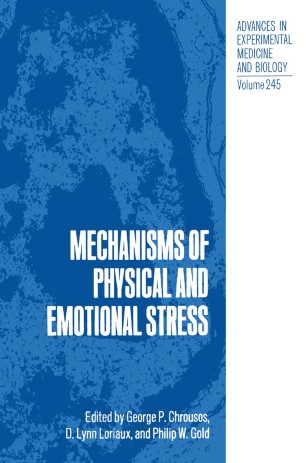 Mechanisms of Physical and Emotional Stress

Part of the Advances in Experimental Medicine and Biology book series (AEMB, volume 245)

It has been over 50 years since Hans Selye formulated his concept of stress. This came after the isolation of epinephrine and norepinephrine and after the sympathetic system was associated with Walter Cannon's "fight or flight" response. The intervening years have witnessed a number of dis­ coveries that have furthered our understanding of the mechanisms of the stress response. The isolation, identification and manufacture of gluco­ corticoids, the identification and synthesis of ACTH and vasopressin, and the demonstration of hypothalamic regulation of ACTH secretion were pivotal discoveries. The recent identification and synthesis of CRR by Willie Vale and his colleagues gave new impetus to stress research. Several new concepts of stress have developed as a result of advances in bench research. These include the concept of an integrated "stress sys­ tem", the realization that there are bi-directional effects between stress and the immune system, the suggestion that a number of common psychiatric disorders represent dysregulation of systems responding to stress, and the epidemiologic association of stress with the major scourges of humanity.