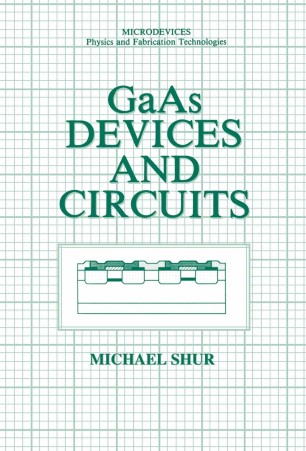 GaAs devices and integrated circuits have emerged as leading contenders for ultra-high-speed applications. This book is intended to be a reference for a rapidly growing GaAs community of researchers and graduate students. It was written over several years and parts of it were used for courses on GaAs devices and integrated circuits and on heterojunction GaAs devices developed and taught at the University of Minnesota. Many people helped me in writing this book. I would like to express my deep gratitude to Professor Lester Eastman of Cornell University, whose ideas and thoughts inspired me and helped to determine the direction of my research work for many years. I also benefited from numerous discussions with his students and associates and from the very atmosphere of the pursuit of excellence which exists in his group. I would like to thank my former and present co-workers and colleagues-Drs. Levinstein and Gelmont of the A. F. Ioffe Institute of Physics and Technology, Professor Melvin Shaw of Wayne State University, Dr. Kastalsky of Bell Communi­ cations, Professor Gary Robinson of Colorado State University, Professor Tony Valois, and Dr. Tim Drummond of Sandia Labs-for their contributions to our joint research and for valuable discussions. My special thanks to Professor Morko.;, for his help, his ideas, and the example set by his pioneering work. Since 1978 I have been working with engineers from Honeywell, Inc.-Drs.