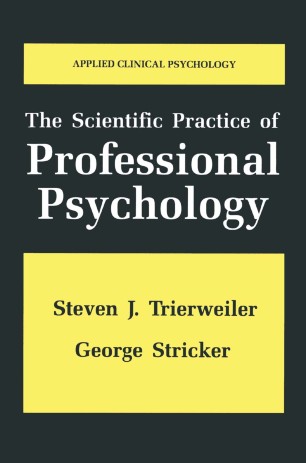 The Scientific Practice of Professional Psychology

A workable vision of scientific practice has proven to be an elusive, if laudable, goal for professional psychology. The field cannot be faulted for failing to seek scientific wisdom, but it has been slow to integrate that wisdom fully with the wisdom of practice. This has proven to be a major oversight for, despite psychology's long­ if the standing commitment to science, practitioners are unlikely to think scientifically methods and products of science are described in ways that make it impossible to do so. Unfortunately, the rhetoric of science too often has done just that: So focused has it been on the problem of distinguishing good science from bad that it has inadvertently defeated any hope of a practical science developing in our field. We offer one remedy for this situation: This book is about scientific thinking for the professional psychologist. Specifically, it is a primer on the application of scientific logic to professional practice. We argue that the professional needs a more straightforward and realistic scientific identity than heretofore has been available. The professional consciously must become a local clinical scientist, bringing all the power of scientific thought to the specifics of the clinical situation. Contrary to forces in psychology that promote uncritical acceptance of science as given by academic researchers or, alternatively, that encourage criticism and ultimate disregard of the scientific endeavor, we call for a redoubling of efforts to incorporate scientific thought into practical professional inquiry.