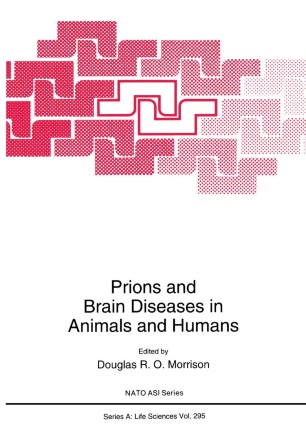 Prions and Brain Diseases in Animals and Humans

Most of the world's experts on prions met for a workshop in Erice in August 1996. The aim of the workshop was to discuss the fundamentals of the science ofprions. It was for­ tunate that so many could be present given the pressure that they were under because of the data presented in March 1996, indicating that Bovine Spongiform Encephalopathy, BSE or Mad Cow Disease, had penetrated the species barrier and was beginning to cause a new dis­ ease in humans--the new variant ofCreutzfeldt-Jakob Disease, nvCJD. This important and urgent subject became an additional major topic at the workshop. This is a book containing most of the talks plus the abstracts of those unable to find time to write up their talks. Almost all papers were written in the spring and summer of 1997 and contain material added after the workshop; thus Bob Will's paper on the new variant of cm contains data up to July 1997 and four contributions arrived in October 1997. In addition to the talks given at our workshop, there was a special joint session with the Planetary Emergencies Workshop where many distinguished scientists, including three Nobel laureates, discussed major issues affecting our planet. Six talks were given by us to this other workshop, five about prions, BSE, and nvCJD, and one on the broader issue of new epi­ demics by Luc Montagnier. Although most of the talks concerned research issues, there were a few special talks.