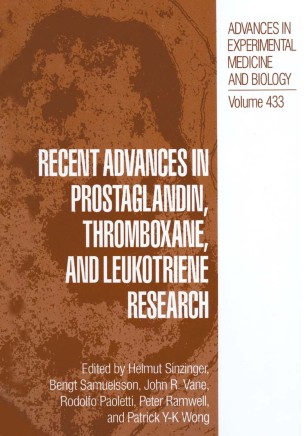 Part of the Advances in Experimental Medicine and Biology book series (AEMB, volume 433)

The International Symposium on Prostaglandins and Related Compounds, first held in Vienna 1972, revisited the city after 24 years for the 10TH Symposium. For the many re­ searchers working in this multi-disciplinary field it was an opportunity to exchange their ex­ periences and share new data with colleagues from all around the world. This scientific exchange was largely encouraged by the unseasonably cold and rainy weather. For the first time, there was quite a large attendance from the former Communist countries. Eugene Garfield prepared a key note address delivered during the meeting (The Sci­ entist 1996, 12) reviewing the contribution of the Nobel Laureates U.S. von Euler, l.R. Vane, S.K. Bergstrom, and B.I. Samuelsson, discussing the relevance of the more than 40,000 pa­ pers in this area published since 1991. Overall, there is still a rapidly growing interest, and in particular a great variety of clinical applications of this family of compounds which were dis­ cussed in detail during the meeting. Beside the lectures there were 19 workshops covering nearly all the topics of key in­ terest. All the speakers were invited to prepare a manuscript which has resulted in the volume now in your hands. Special thanks to Dr. Patrick Wong and the new publisher of this series who helped to publish the proceedings in the usual quality and reasonable period of time. Looking forward to seeing all of you again in Florence in 1999, hopefully with much more sun.

Sir John Vane is the Director General at the William Harvey Research Institute, an independent charitable foundation within Queen Mary and Westfield College of the University of London, UK.
Sir John Vane shared the Nobel Prize in Physiology or Medicine in 1982 for his discoveries of the mechanism of action of aspirin and of prostacyclin, as well as his work on other prostanoids.