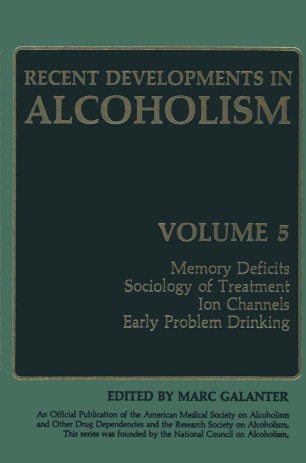 From the President of the Research Society on Alcoholism In recent years, increasingly convincing evidence in support of a biobehavioral conceptual model of the etiology of alcoholism has emerged. In this model, the disorder is perceived as arising from the interaction of geneticlbiological vulnerability and psychosocial risk. Drinking, or alcohol-seeking, is a metric trait. Alcoholism, which is a state of abnormally intense alcohol-seeking be­ havior that, over time, leads to the alcohol dependence syndrome, lies at the extreme, high end of this quantitative measure. Metric traits are influenced by multiple genes; the extent of genetic loading of biological risk for alcoholism would be different in different individuals. Added to this kind of variability is the wide range of options for exposure to the psychosocial risk factors of heavy drinking provided by modern society. Further, environmental prov­ ocation also changes when life events change. It is not surprising, therefore, from the combination of the kinds of genetic and environmental variability described above that there is a wide array of patterns of expression of the disorder alcoholism, referred to by some as "alcoholisms. " In the search for understanding of underlying mechanisms and rational bases for potential therapy, it is important to focus our attention on the final common pathway of this disorder, alcohol-seeking behavior. This series, ever since its beginning in 1983, has been sensitive to the complexities of the interaction between biological and psychosocial risk factors in alcoholism.