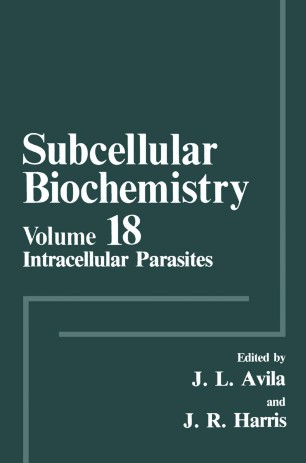 Volume 18 of the Subcellular Biochemistry series, which specializes in various aspects of the biochemistry of the intracellular parasites, was initially proposed by Jose Luis Avila and strongly supported by myself, as Series Editor of Sub­ cellular Biochemistry. Considerable assistance was received from Professor Frank Wunderlich (University of Dusseldorf) and more particularly from Dr. Michael Miles (London School of Hygiene and Tropical Medicine) during the compilation of the list of possible chapters. Our initial aim was to present a comprehensive survey of this broad field of study. Although some interesting topics have been lost due to authors backing out late in the production schedule of the book, the manuscripts that were submitted have provided a useful over­ view of the subject, with notable strength within the field of Leishmania. The 13 chapters of the book have been grouped according to subject. The first five chapters deal with Leishmania and are followed by two chapters on Try­ ponosoma cruzi, two on the malarial parasites, and two on the Coccidia. The fmal two chapters cover the Microsporidia and chemotherapy, respectively.