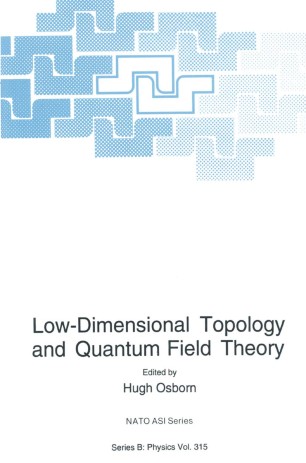 The motivations, goals and general culture of theoretical physics and mathematics are different. Most practitioners of either discipline have no necessity for most of the time to keep abreast of the latest developments in the other. However on occasion newly developed mathematical concepts become relevant in theoretical physics and the less rigorous theoretical physics framework may prove valuable in understanding and suggesting new theorems and approaches in pure mathematics. Such interdis­ ciplinary successes invariably cause much rejoicing, as over a prodigal son returned. In recent years the framework provided by quantum field theory and functional in­ tegrals, developed over half a century in theoretical physics, have proved a fertile soil for developments in low dimensional topology and especially knot theory. Given this background it was particularly pleasing that NATO was able to generously sup­ port an Advanced Research Workshop to be held in Cambridge, England from 6th to 12th September 1992 with the title Low Dimensional Topology and Quantum Field Theory. Although independently organised this overlapped as far as some speak­ ers were concerned with a longer term programme with the same title organised by Professor M Green, Professor E Corrigan and Dr R Lickorish. The contents of this proceedings of the workshop demonstrate the breadth of topics now of interest on the interface between theoretical physics and mathematics as well as the sophistication of the mathematical tools required in current theoretical physics.