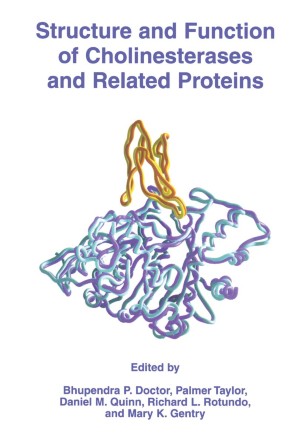 Structure and Function of Cholinesterases and Related Proteins

The Sixth International Meeting on Cholinesterases and Related Proteins, Choli­ nesterases '98, was organized by Palmer Taylor and his associates at the University of California-San Diego and convened in La Jolla, California, USA, in March of 1998. This was the first conference of the series to be held in the United States, let alone on the Pa­ cific Rim. Nearly 200 delegates from twenty countries-from Asia, Australia, Europe, and North and South America-heard 75 oral presentations and viewed 90 posters on current research on cholinesterases and related proteins. The meeting framework was structured to include two days of plenary sessions, followed by two days of concurrent sessions and workshops in specific areas. Communication at the concurrent sessions was facilitated by the conference settings of the Martin Johnson House, on a scenic bluff overlooking the blue Pacific Ocean, and the San Diego Supercomputer Center, which enabled projection and rotation of protein structures in three dimensions for a large audience. This book is the compilation of the presentations at the Sixth International Meeting on Cholinesterases and Related Proteins into a volume that describes recent investigations on the structure, catalytic and non-catalytic functions of acetylcholinesterase (AChE), butyrylcholinesterase (BuChE), and related proteins, as well as studies on the molecular and cellular biology of these enzymes and the genes that encode them.