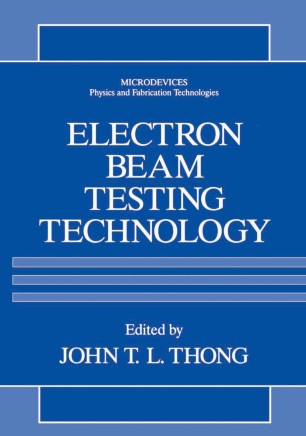 Although exploratory and developmental activity in electron beam testing (EBT) 25 years, it was not had already been in existence in research laboratories for over until the beginning of the 1980s that it was taken up seriously as a technique for integrated circuit (IC) testing. While ICs were being fabricated on design rules of several microns, the mechanical ne edle probe served quite adequately for internal chip probing. This scenario changed with growing device complexity and shrinking geometries, prompting IC manufacturers to take note ofthis new testing technology. It required several more years and considerable investment by electron beam tester manufacturers, however, to co me up with user-friendly automated systems that were acceptable to IC test engineers. These intervening years witnessed intense activity in the development of instrumentation, testing techniques, and system automation, as evidenced by the proliferation of technical papers presented at conferences. With the shift of interest toward applications, the technology may now be considered as having come of age.