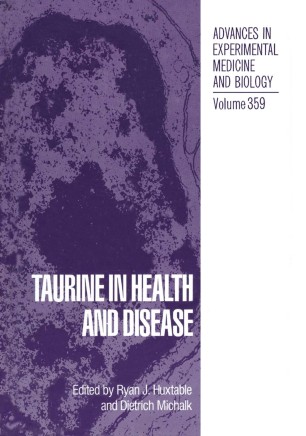 Taurine in Health and Disease

Part of the Advances in Experimental Medicine and Biology book series (AEMB, volume 359)

Taurine, or 2-aminoethane sulfonic acid, has long been known to be the major organic product formed from the breakdown of the sulfur-containing amino acids, methionine and cysteine. It is excreted as such in the urine or as bile acid conjugates in the bile. Research over the last 25 years, however, has uncovered an amazing variety of phenomena involving taurine. Despite the fact that the mechanism of action of taurine in some of these phenomena remains to be elucidated, it is clear that taurine is of far more physiological relevance than being the mere metabolic debris of sulfur amino acid catabolism. It also has numerous pharmacological actions that are beginning to be developed, as exemplified by some of the studies reported in this volume. This volume reports the proceedings of the latest of a series of international symposia, continuing on from the initial meeting held in Tucson, Arizona, in 1975. The latest symposium was the first to be held in Germany, in Cologne from August 29 through September 1, 1993. It continued the multidisciplinary approach that has been the norm for taurine symposia. We hope the publication of the proceedings will stimulate further investigations on this simple but fascinating compound.