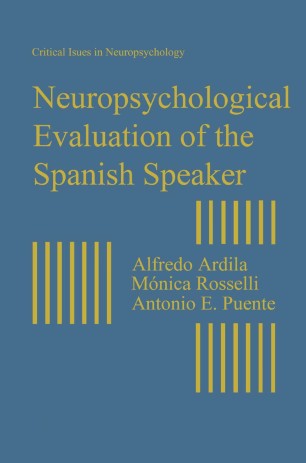 Neuropsychological Evaluation of the Spanish Speaker

This book is the culmination of a research program conducted in Colombia during the past several years. The fundamental aim of the program was to develop neuropsychological tests for Spanish speakers, especially elderly individuals and those with limited edu­ cational attainment. The lack of norms for these populations repre­ sents a significant practical problem not only in developing countries but also in more developed countries. For example, norms are usually obtained with middle-class Anglo-Saxon English-speaking popula­ tions, often university students, and such norms do not usually include individuals older than 65 years. Furthermore, very few neuro­ psychological tests have been developed for Spanish speakers; fre­ quently, tests are translated into Spanish (often poor translations at that), but the norms used are still those obtained from English­ speaking populations. This volume summarizes the normative results of this research program. We anticipate that these tests and norms will be particularly useful in the neuropsychological evaluation of Spanish speakers, especially those with limited educational attainment, and the elderly. The United States represents the fifth largest Spanish-speaking coun­ try in the world (after Mexico, Spain, Argentina, and Colombia), with over 20 million speakers. It is anticipated that by the year 2025 there will be as many Hispanics in the United States as members of all other ethnic minority groups combined. Further, about 10% of the U. S. population are considered functionally illiterate, with Hispanics rep­ resenting an unusually large segment.