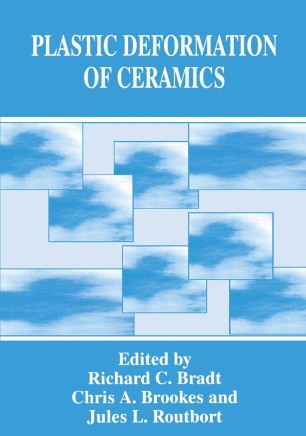 This proceedings volume, "Plastic Deformation of Ceramics," constitutes the papers of an international symposium held at Snowbird, Utah from August 7-12, 1994. It was attended by nearly 100 scientists and engineers from more than a dozen countries representing academia, national laboratories, and industry. Two previous conferences on this topic were held at The Pennsylvania State University in 1974 and 1983. Therefore, the last major international conference focusing on the deformation of ceramic materials was held more than a decade ago. Since the early 1980s, ceramic materials have progressed through an evolutionary period of development and advancement. They are now under consideration for applications in engineering structures. The contents of the previous conferences indicate that considerable effort was directed towards a basic understanding of deformation processes in covalently bonded or simple oxide ceramics. However, now, more than a decade later, the focus has completely shifted. In particular, the drive for more efficient heat engines has resulted in the development of silicon-based ceramics and composite ceramics. The discovery of high-temperature cupric oxide-based superconductors has created a plethora of interesting perovskite-Iike structured ceramics. Additionally, nanophase ceramics, ceramic thin films, and various forms of toughened ceramics have potential applications and, hence, their deformation has been investigated. Finally, new and exciting areas of research have attracted interest since 1983, including fatigue, nanoindentation techniques, and superplasticity.