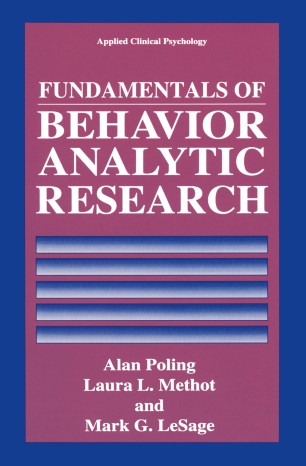 By the end of his long life, B. F. Skinner (1904-1990) had become one of the most influential and best known of psychologists (Gilgen, 1982; Heyduke & Fenigstein, 1984). An important feature of the approach to the study of behavior that he championed, behavior analysis, is the intensive study of individual subjects over time. This approach, which is characterized by the use of within-subject experimental designs, repeated and direct measures of behavior, and graphic analysis of data, stands in marked contrast to the research methods favored by many nonbehavioral psychologists. Skinner discussed the advantages of his approach in a number of books (e.g., Skinner, 1938, 1953, 1979), but never devoted a book to methodology. Sidman (1960) and Johnson and Pennypack (1993b) did devote books to behavior analytic research methodology. These books are of excep­ tionally high quality and should be read carefully by anyone interested in behavior analysis. They are sophisticated, however, and are not easy reads for most neophyte behaviorists. Introductory-level books devoted entirely to methods of applied behavior analysis (e.g., Kazdin, 1982; Barlow & Hersen, 1984) are easier to understand, but somewhat limited in coverage.