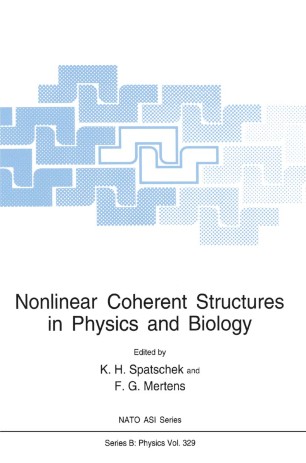 This volume contains the Proceedings of the NATO Advanced Research Workshop (ARW) and Emil-Warburg-Symposium (EWS) "Nonlinear Coherent Structures in Phy­ sics and Biology" held at the University of Bayreuth from June 1 -4, 1993. Director of the ARW was K. H. Spatschek, while F.G. Mertens acted as the co-director, host, and organizer of the EWS. The other members of the scientific organizing committee were A.R. Bishop (Los Alamos), J.C. Eilbeck (Edinburgh), and M. Remoissenet (Dijon). This was the eighth meeting in a series of interdisciplinary workshops founded by our French colleagues who had organized all the previous workshops, e.g. 1989 in Montpel­ lier and 1991 in Dijon. We were asked to organize the meeting this time in Germany. Of course, we wanted to keep the character defined by the previous meetings, which were always characterized by an open and friendly atmosphere, being not too large in quantity, but high in quality. This time altogether 103 participants attended the workshop. During the past years most of the participants met several times and discussed problems connected with the generation of nonlinear coherent structures in physics and biology.