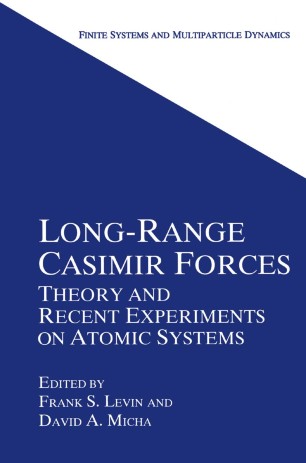 This series, Finite Systems and Multiparticle Dynamics, is intended to provide timely reviews of current research topics, written in a style sufficiently pedagogic so as to allow a nonexpert to grasp the underlying ideas as well as understand technical details. The series is an outgrowth of our involvement with three interdis­ ciplinary activities, namely, those arising from the American Physical Society's Topical Group on Few Body Systems and Multiparticle Dynam­ ics, the series of Gordon Research Conferences first known by the title "Few Body Problems in Chemistry and Physics" and later renamed "Dynamics of Simple Systems in Chemistry and Physics," and the series of Sanibel Symposia, sponsored in part by the University of Florida. The vitality of these activities and the enthusiastic response to them by researchers in various subfields of physics and chemistry have convinced us that there is a place--even a need-for a series of timely reviews on topics of interest not only to a narrow band of experts but also to a broader, interdisciplinary readership. It is our hope that the emphasis on pedagogy will permit at least some of the books in the series to be useful in graduate-level courses. Rather than use the adjective "Few-Body" or "Simple" to modify the word "Systems" in the title, we have chosen "Finite. " It better expresses the wide range of systems with which the reviews of the series may deal.