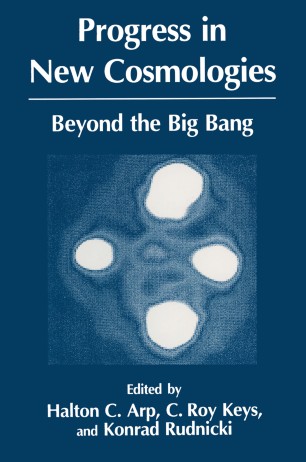 Beyond the Big Bang

The Hidden Hypotheses Behind the Big Bang It is quite unavoidable that many philosophical a priori assumptions lurk behind the debate between supporters of the Big Bang and the anti-BB camp. The same battle has been waged in physics between the determinists and the opposing viewpoint. Therefore, by way of introduction to this symposium, I would like to discuss, albeit briefly, the many "hypotheses", essentially of a metaphysical nature, which are often used without being clearly stated. The first hypothesis is the idea that the Universe has some origin, or origins. Opposing this is the idea that the Universe is eternal, essentially without beginning, no matter how it might change-the old Platonic system, opposed by an Aristote­ lian view! Or Pope Pius XII or Abbe Lemaitre or Friedmann versus Einstein or Hoyle or Segal, etc. The second hypothesis is the need for a "minimum of hypotheses" -the sim­ plicity argument. One is expected to account for all the observations with a mini­ mum number of hypotheses or assumptions. In other words, the idea is to "save the phenomena", and this has been an imperative since the time of Plato and Aristotle. But numerous contradictions have arisen between the hypotheses and the facts. This has led some scientists to introduce additional entities, such as the cosmologi­ cal constant, dark matter, galaxy mergers, complicated geometries, and even a rest­ mass for the photon. Some of the proponents of the latter idea were Einstein, de Broglie, Findlay-Freundlich, and later Vigier and myself.