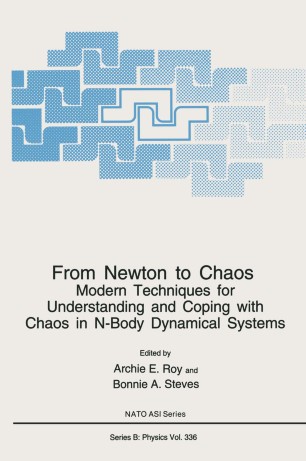 From Newton to Chaos

The reader will find in this volume the Proceedings of the NATO Advanced Study Institute held in Cortina d' Ampezzo, Italy, between July 25 and August 6, 1993, under the title From Newton to Chaos: Modem Techniques for Understanding and Coping With Chaos inN-Body Dynamical Systems. This institute was the latest in a series of meetings held every three years from 1972 to 1990 in dynamical astronomy, theoretical mechanics and celestial mechanics. The proceedings from these institutes have been well-received in the international community of research workers in these disciplines. The present institute was well attended with 15 series of lectures being given by invited speakers: in addition some 40 presentations were made by the other participants. The majority of these contributions are included in these proceedings. The all-pervading influence of chaos in dynamical systems (of even a few variables) has now been universally recognised by researchers, a recognition forced on us by our ability, using powerful computer hardware and software, to tackle dynamical problems that until twenty-five years ago were intractable. Doubtless it was felt by many that these new techniques provided a break-through in celestial mechanics and its related disciplines. And so they were.