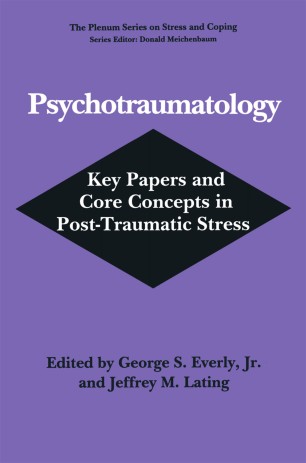 The nosological roots of post-traumatic stress disorder (PTSD) may be traced back to th~American Psychiatric Association's DSM-I entry of gross stress reaction, as published in 1952. Yet the origins of the current enthusi­ asm with regard to post-traumatic stress can be traced back to 1980, which marked the emergence of the term post-traumatic stress disorder in the DSM­ III. This reflected the American Psychiatric Association's acknowledgment of post-traumatic stress as a discrete, phenomenologically unique, and reli­ able psychopathological entity at a time in American history when such recognition had important social, political, and psychiatric implications. Clearly, prior to DSM-I the lack of a generally accepted terminology did little to augment the disabling effects that psychological traumatization could engender. Nor did the subsequent provision of an official diagnostic label alone render substantial ameliorative qualities. Nevertheless, the post­ Vietnam DSM-III recognition of PTSD did herald a dramatic increase in research and clinical discovery. The American Red Cross acknowledged the need to establish disaster mental health services, the American Psychological Association urged its members to form disaster mental health networks, and the Veterans Administration established a national study center for PTSD.