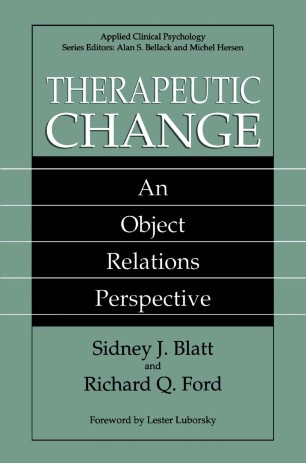 Dynamic psychotherapy research has become revitalized, especially in the last three decades. This major study by Sidney Blatt, Richard Ford, and their associates evaluates long-term intensive treatment (hospital­ ization and 4-times-a-week psychotherapy) of very disturbed patients at the Austen Riggs Center. The center provides a felicitous setting for recovery-beautiful buildings on lovely wooded grounds just off the quiet main street of the New England town of Stockbridge, Massa­ chusetts. The center, which has been headed in succession by such capable leaders as Robert Knight, Otto Will, Daniel Schwartz, and now Edward Shapiro, has been well known for decades for its type of inten­ sive hospitalization and psychotherapy. Included in its staff have been such illustrious contributors as Erik Erikson, David Rapaport, George Klein, and Margaret Brenman. The Rapaport-Klein study group has been meeting there yearly since Rapaport's death in 1960. Although the center is a long-term care treatment facility, it remains successful and solvent even in these days of increasingly short-term treatment. Sidney Blatt, Professor of Psychology and Psychiatry at Yale Univer­ sity, and Richard Ford of the Austen Riggs Center, and their associates assembled a sample of 90 patients who had been in long-term treatment and who had been given (initially and at 15 months) a set of psychologi­ cal tests, including the Rorschach, the Thematic Apperception Test, a form of the Wechsler Intelligence Test, and the Human Figure Drawings.