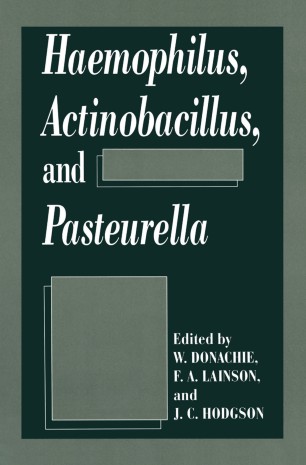 The Third International Conference on Haemophilus, Actinobacillus, and Pasteurella (HAP94) was held in July and August at the Edinburgh Conference Centre, Heriot-Watt University, Riccarton Campus, Edinburgh, Scotland, UK. Previous conferences in 1981, Copenhagen, and 1989, Guelph, had indicated widespread interest in this group of pathogenic bacteria and the timing of the Edinburgh conference was prompted by the major advances in our knowledge of the HAP group that had occurred in the five years since the Guelph meeting. These organisms are considered as a group because of their close relationship in an evolutionary sense and because of the similarities in the types of diseases that they preduce. The main objectives of the meeting were to review and discuss current knowledge and present experimental findings relating to the fundamental, applied, clinical, and therapeutic aspects of disease research involving the HAP group of organisms. HAP 94 was attended by 160 delegates from around the world and included many of the foremost researchers studying HAP organisms. The conference was structured around 16 talks from invited speakers who covered key areas of HAP research including taxonomy, mechanisms of pathogenesis, animal disease models, virulence factors, molecular biology, immunolgy, antigen analyses, and experimental and commercial vaccine development. The talks provided a review of the current state of research in each field and allowed each speaker to focus on his or her personal research interests.