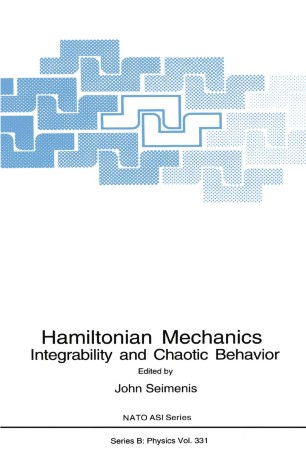 This volume contains invited papers and contributions delivered at the International Conference on Hamiltonian Mechanics: Integrability and Chaotic Behaviour, held in Tornn, Poland during the summer of 1993. The conference was supported by the NATO Scientific and Environmental Affairs Division as an Advanced Research Workshop. In fact, it was the first scientific conference in all Eastern Europe supported by NATO. The meeting was expected to establish contacts between East and West experts as well as to study the current state of the art in the area of Hamiltonian Mechanics and its applications. I am sure that the informal atmosphere of the city of Torun, the birthplace of Nicolaus Copernicus, stimulated many valuable scientific exchanges. The first idea for this cnference was carried out by Prof Andrzej J. Maciejewski and myself, more than two years ago, during his visit in Greece. It was planned for about forty well-known scientists from East and West. At that time participation of a scientist from Eastern Europe in an Organising Committee of a NATO Conference was not allowed. But always there is the first time. Our plans for such a "small" conference, as a first attempt in the new European situation -the Europe without borders -quickly passed away. The names of our invited speakers, authorities in their field, were a magnet for many colleagues from all over the world.