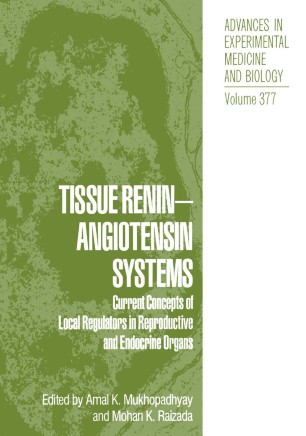 Current Concepts of Local Regulators in Reproductive and Endocrine Organs

Part of the Advances in Experimental Medicine and Biology book series (AEMB, volume 377)

Recent progress in recombinant DNA technology and the availability of a number of nonpeptide subtype-specific receptor antagonists and of specific antibodies to components of prorenin-renin-angiotensin system (PRAS) have led to rapid advances in the under­ standing of the multifaceted role of angiotensin II, classically known as a peptide hormone of cardiovascular homeostasis. Accumulating evidence sug­ responsible for the regulation gests that, in addition to its role in salt and water metabolism, PRAS may control other physiological functions including neurosecretion, cellular proliferation, hypertrophy and/or differentiation, angiogenesis and gonadal function. At the same time, it is becoming evident that the specialized functions of endocrine glands are not only regulated by trophic hormones but also by locally produced paracrine/autocrine factors. The concept is emerging that tissue PRAS is one such locally active regulatory system. With more and more reproductive and endocrine organs being added to the list of tissues that contain a local tissue PRAS, questions are being raised by the reproductive biologists and endocrinologists as to the role of such systems in the tissues of their interest. On the other hand, the cardiovascular and renovascular physiologists are wondering about the relevance of PRAS in various peripheral tissues compared to those of the classical cardiovascular organs. It appeared, therefore, that the time was ripe for a meeting to consider a merger of interest in these two important but heretofore distinct areas of physiology.