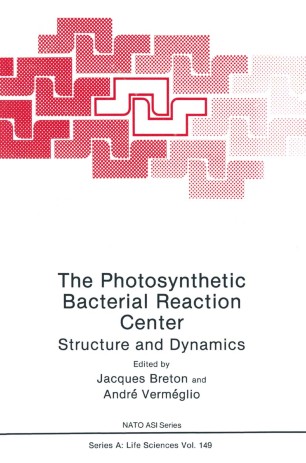 This volume contains the contributions from the speakers at the NATO Advanced Research Workshop on "Structure of the Photosynthetic Bacterial Reaction Center X-ray Crystallography and Optical Spectroscopy with Polarized Light" which was held at the "Maison d'Hotes" of the Centre d'Etudes Nucleaires de Cadarache in the South of France, 20-25 September, 1987. This meeting continued in the spirit of a previous workshop which took place in Feldafing (FRG), March 1985. Photosynthetic reaction centers are intrinsic membrane proteins which, by performing a photoinduced transmembrane charge separation, are responsible for the conversion and storage of solar energy. Since the pioneering work of Reed and Clayton (1968) on the isolation of the reaction center from photosynthetic bacteria, optical spectroscopy with polarized light has been one of the main tools used to investigate the geometrical arrangement of the various chromophores in these systems. The recent elucidation by X-ray crystallography of the structure of several bacterial reaction centers, a breakthrough initiated by Michel and Deisenhofer, has provided us with the atomic coordinates of the pigments and some details about their interactions with neighboring aminoacid residues. This essential step has given a large impetus both to experimentalists and to theoreticians who are now attempting to relate the X-ray structural model to the optical properties of the reaction center and ultimately to its primary biological function.