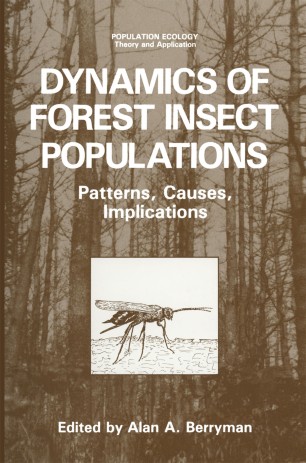 Insects multiply. Destruction reigns. There is dismay, followed by outcry, and demands to Authority. Authority remembers its experts or appoints some: they ought to know. The experts advise a Cure. The Cure can be almost anything: holy water from Mecca, a Government Commis­ sion, a culture of bacteria, poison, prayers denunciatory or tactful, a new god, a trap, a Pied Piper. The Cures have only one thing in common: with a little patience they always work. They have never been known entirely to fail. Likewise they have never been known to prevent the next outbreak. For the cycle of abundance and scarcity has a rhythm of its own, and the Cures are applied just when the plague of insects is going to abate through its own loss of momentum. -Abridged, with insects in place of voles, from C. Elton, 1924, Voles, Mice and Lemmings, with permission of Oxford University Press This book is an enquiry into the "natural rhythms" of insect abundance in forested ecosystems and into the forces that give rise to these rhythms. Forests form unique environ­ ments for such studies because one can find them growing under relatively natural (pri­ meval) conditions as well as under the domination of human actions. Also, the slow growth and turnover rates of forested ecosystems enable us to investigate insect popula­ tion dynamics in a plant environment that remains relatively constant or changes only slowly, this in contrast to agricultural systems, where change is often drastic and frequent.